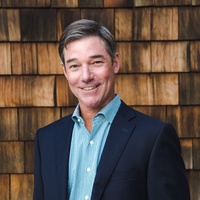 The beach is home for TF. Born and raised in the beach communities surrounding Jacksonville, Florida, TF attended Auburn University and graduated in 1993 with a Bachelor of Science in Building Science Construction. Following undergraduate studies, TF earned his Juris Doctor from Cumberland School of Law, Samford University.

Before following in his father’s footsteps in the finance industry, TF blended his construction and law background acting as in-house counsel and project manager for Doster Construction in Birmingham, Alabama and Buchanan General Contracting Company in Seattle, Washington.

In 2007 he moved back to the Jacksonville area to work with his father at Merrill Lynch as a Wealth Advisor and First Vice President until they founded their independent firm.

TF is a true outdoorsman. He enjoys playing golf, fly fishing, and surfing. His faith and his family are what matters most to him. His son is a talented drummer and enjoys cooking.  supports his wife, a driven business owner herself, and he enjoys watching his daughter, an accomplished equestrian, ride and compete.