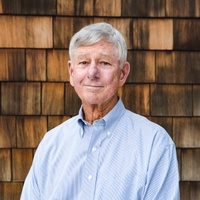 Born in Jacksonville, Florida, Tim Jenkins attended Auburn University on a full NROTC scholarship and graduated in 1962 with a Bachelor of Electrical Engineering degree.  Commissioned as an Ensign, USN, he served four years on active duty and 28 years in the Navy Reserve as a Surface Warfare Officer.  A Vietnam veteran, he attained the rank of Rear Admiral in 1991 and retired from the Navy in 1998.

Tim was awarded his Master of Engineering degree at the University of Florida in 1967.  For the next 14 years he was employed in the financial and management consulting industry.  In 1981 he joined the investment firm of Merrill Lynch as a Financial Advisor and later as Vice President.  His 39 years of successful service at Merrill provided him with a wide range of investment experience over many different market cycles.

In 2020, he joined his son T.F. in the founding of Rivergrass Wealth Management in continuation of their joint financial advisory practice.  Married to his wife Pat since 1966, they are the proud parents and grandparents of a son, a daughter, and five grandchildren.